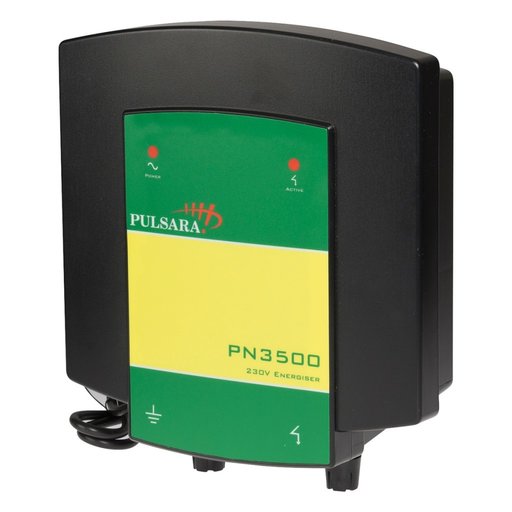 Pulsara's PN series are 230 Volt mains powered energisers. The PN3500 energiser of Pulsara is developed to keep animals safely inside in the most animal-friendly and safe manner. The energiser delivers a top performance near dense vegetation too. If you want to be guarteed to have sufficient voltage on your fencing, ensuring your animals stay safely in your pasture, the Pulsara PN3500 energiser is what you are looking for.

The PN3500 supports fencing up to 20 kilometer. This length is determined by the maxuimum output voltage of 11.000 Volt. Depending on other variables this lenght can be influenced.

For the optimal fence length supported by the Pulsara PN3500 we recommend the use of high quality conductors. The quality of the consuctors determine the resistance in the fence, the higher the conductor quality, the lower the resistance and the longer the fence can be.

The maximum pulse of the Pulsara PN3500 determines for what animals it is most suited. The maximum impulse output indicates the maximum pulse given to the animal. When looking at the maximum impulse output, a higher number reflects a stronger pulse given by the energiser. The PN3500 has a maximum impulse output of 3,8 joule, which is recommended for horses, cattle, sheep and pigs. While horses and cattle are larger in size compared to the sheep and pigs, certain characteristics of the animal make the Pulsara PN3500 the best sollution for your fencing. As sheep and pigs have lower contact surface with the ground compared to horses and cattle, the pulse has less impact on them. This also accounts for their skin and wool, which have a higher resistance which lowers the impact of the impulse as well.

The Pulsara PN3500 has a built in lightning protection. So when lightning strikes your fence, the electricity network to which it is connected is not affected.

To have a clear indication on the status of the energiser, the PN3500 of Pulsara has LED indicators to show it's status.

Per joule maximum impulse output we recommend 1 meter earth rod. As the maximum impulse output of the Pulsara PN3500 is 3,8 joules we recommend a minimum of 4 meter earthing. There is no specific combination of earth rods for the energiser, as long the combined length is 4 meter. Be aware that setting up a fence with less earthing does affect the quality while using more earthing has no impact. 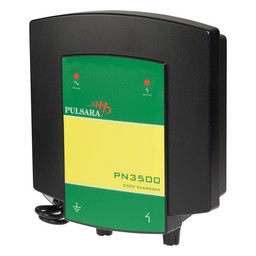