If you are looking for sturdy mains energisers that are easy to connect, Pulsara is what you are looking for. Pulsara's PN series: 230 Volt devices for hobby and professional use. The energisers are developed to keep animals safely inside in the most animal-friendly and safe manner. Every energizer is developed to be safe for human and animals. The PN1000 delivers a top performance near dense vegetation too. Using the PN1000 you are guaranteed to have sufficient voltage on your fencing, ensuring your animals stay safely in the pasture.

The recommended length of fencing charged by the Pulsara PN3500 is influenced by different variables. One of these variables is the conductor used for the fence. For the best performance of the energiser, we recommend to use high quality conductors. If the conductors used are poor quality, the resistance on the fence is higher, impacting the length of the fence.

It is always wise to regularly check the power on the fence with a fence tester.

This device is suitable for sheep as well as horses. Eventhough the animal differs is size, certain characteristics of the animal makes the PN1000 suitable their fencing. As a sheep compared to a horse has a small contact surface and has a thick skin, a higher maximum impulse energy is necessary to get the same effect.

All mains energisers in the PN-series have built in lightning protection. This helps in protecting the energy network to which the energiser is connected when lightning strikes.

To have a clear indication on the status of the energiser, the PN1000 of Pulsara has LED indicators to show the status.

To have an effective electric fence, good earthing is important. The minimum required earthing for the Pulsara PN1000 is 1,5 meters. The rule of thumb regarding the earthing an energiser is 1 meter per 1 joule maximum impulse output. For the performance of the energiser it does not matter how the 1,5 meter earthing is composed. You could choose one earth rod of 1,7 meters, but also one earth rod of 1 meter and one of 0,5 meter. 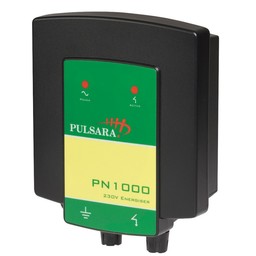