The Birth Alarm system has two different operating systems depending upon the behavioural characteristics of the mare. In the late stages of gestation it is not normal for a mare to lie completely on her side when resting, this position is thus unique to the birth process. Usually mares will rest in a half lying, sitting or even standing position. For this group of mares the Birth Alarm is operated on setting 4a.

Approximately 15% of mares do rest in the totally lateral position and thus form an exception to the rule. For these mares Birth Alarm is equipped with a special function which enables detection and reporting of the onset of delivery in all cases. For this the Birth Alarm is operated on setting 4b.

Operation on setting 4a:

For mares where lying completely on their side is unique to the birth process. In order to gather and focus the strength for a contraction the mare lies down in the totally lateral position. The transmitter registers this position and the alarm is activated after 7.6 seconds. Research has established that a contraction lasts a minimum of 7 seconds.

Operation on setting 4b:

For mares which may lie completely over on their side in order to rest. There are two situations which may arise. 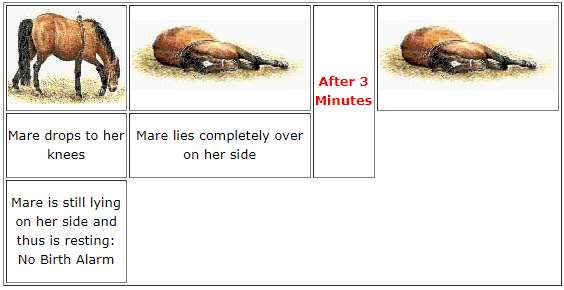 Mare is still lying on her side and thus is resting: No Birth Alarm 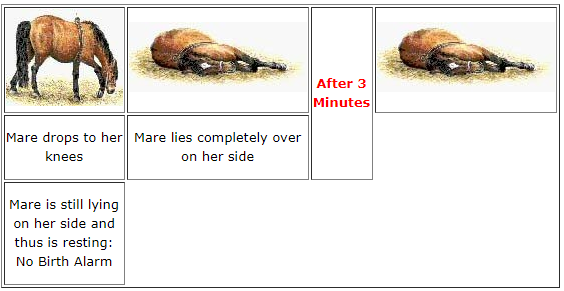 The mare lies down in the totally lateral position to rest. The alarm will not activate although the receiver does indicate that the mare is on her side and the transmitter is sending a signal. If the mare is still lying in this position after three minutes the Birth Alarm registers that the mare is resting and the system is neutralized. Suppose after half an hour the mare gets up and then once again lies down on her side. The Birth Alarm again registers the position for a period of three minutes.

The period of three minutes is not arbitrary. Research has shown that a mare’s contraction never lasts longer than 2.5 minutes. The Birth Alarm system is based on a period of 3 minutes – a safety margin of 0.5 minutes. 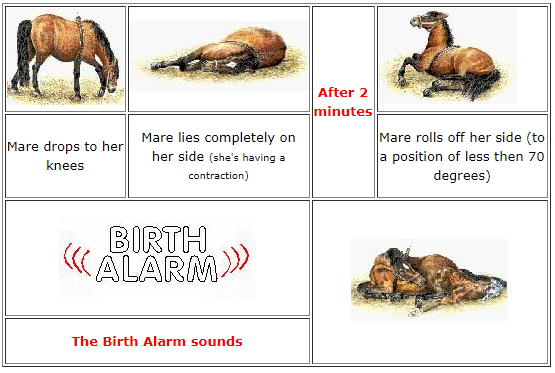 The mare lies down flat on her side. The alarm does not go off after 7.6 second as the system is set on 4b but the receiver does register that the mare is lying in this position. After the contraction the mare will prepare herself for the following contraction. She does this by coming out of the totally lateral position. If the Birth Alarm registers this movement within a period of 3 minutes after the mare has lain down, the alarm activates.

Back to the Birth Alarm product page.