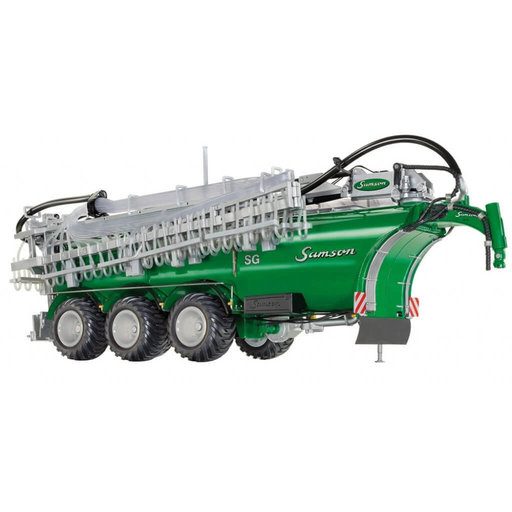 The Wiking Samson slurry tanker is a real model giant: With the Samson SG28 slurry tanker, WIKING sets new standards in agricultural machinery. The mighty slurry tanker impresses with its miniaturised SBX 16-30 drag hose distributor, which has a width of 96 centimetres in working condition. There is a good reason why the slurry tanker has reached this unprecedented size: the Danish designers of the Samson model designed a slurry tanker entirely according to the requirements of large-scale agriculture. Thus, the SG28 - comprehensible to anyone in 1:32 scale - ensures high flexibility with optimum manoeuvrability and large loading capacity at the same time. WIKING realises the so unusual "gooseneck" design in a prototypical way.

With the SG28, WIKING is building Samson's mammoth prototype with a three-axle chassis and a tank capacity of a proud 28 cubic metres. What makes the Samson slurry tanker so impressive as a WIKING model is undoubtedly the SBX 16-30 towable hose spreader, which simulates a working width of 30 metres. The entire multiple-moving boom as well as the drag hoses also prove to be prototypical thanks to fine engravings. With the SG28, WIKING is launching an offensive of large-scale precision models, making the well-known variety of tractor types even more attractive by designing realistic tractor units. The traditional model makers rely exclusively on manual labour for assembly, combining plastic elements with zinc die-cast components. The printing comfort takes the originality into account. The models convince with high functionality in the internationally recognised agricultural machinery scale 1:32.

The model was produced in the usual high Wiking quality and reflects the original in the best possible way. 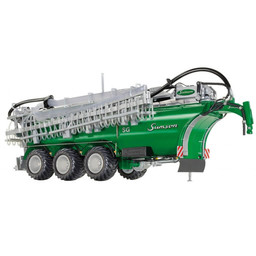 Samson slurry tanker was added to your shopping cart!