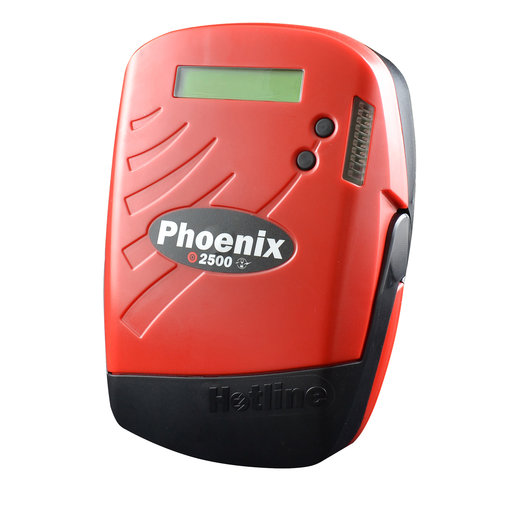 - Mains powered - Ideal for fences up to 85 km - Power: 7 - 25 Joule - Suitable for: permanent electric fencing, all types of farm and dealing with medium to heavy vegetation

The Phoenix HMX2500 is a high quality single output energiser with an intelligent timed power boost function that automatically increases output if the fence load increases. Cost effective, efficient and very powerful, this is an electric fence energiser that will prove to be suitable for longer permanent electric fences.

Timed Power Boost
Commencing September 2010, European manufacturers of electric fence energiser have had to conform with strict new guidelines, restricting the output of high powered energisers to a maximum of 5 joules when operating under a heavy fence load. These guidlines are designed to protect both humans and animals from receiving a potentially harmful electric shock if trapped on an electric fence.

This has resulted in the development of Hotlines' high powered, intelligent Phoenix energisers, which increase output to maintain effective fence voltage at varying fence loads. When the energiser detects a  sudden heavy load the energiser increases power in a controlled and safe manner, which minimises the risk to any people or animals, while mainting enough current through the fence line to maintain an effective system.

The Phoenix models HMX2500 operates from a platform of 7 joules with a boosted capacity of 25 joules respectively.

If there is a gradual increase of the fence load up to a level where 7 joules proves insufficient to maintain an effective voltage, the energiser boosts output to the relevant joule. Alternatively, when a sudden, heavy load is detected, the energiser begins a 45 minute period of 'Safe Mode' before switching to the boosted mode.

Safe Mode
When the Phoenix HMX2500 (and HMX1600) energiser detects a sudden heavy load, there is first a delay period of 6 seconds, before the alarm sounds, assuming the cause of increased load has not cleared. There is then a further 39 seconds after which the energiser boosts output to full power at the slower than normal rate of 3 seconds between pulses. The slow pulsed boost and alarm then continues for 45 minutes unless the obstruction is removed from the fence, in which case the energiser will return to normal operation. If the load hasn't been cleared by the end of this 45 minute period the alarm stops, but the energiser will continue at the boost output level. The pulse rate also returns to the normal one pulse per second.

Summary
The Phoenix HMX2500 mains energisers is difficult to beat if you're looking for reliable high performance and have long permanent fences, encroaching vegetation, or difficult animals to contend with. Coupled with exceptional safety features and user friendly functionality, battery backup and an optional facility to enable remote control via a mobile phone, this is a very high quality piece of equipment that will quite simply, do the job.

Please refer to the section 'Installation of Mains Energisers' in our Guide to understanding modern electric fences for more information on connecting your energiser.

2 Years Warranty
Hotline Electric Fence Energisers are supplied with lead and 3 pin plug for connection to mains as standard. 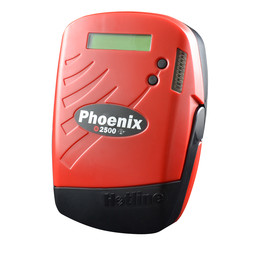